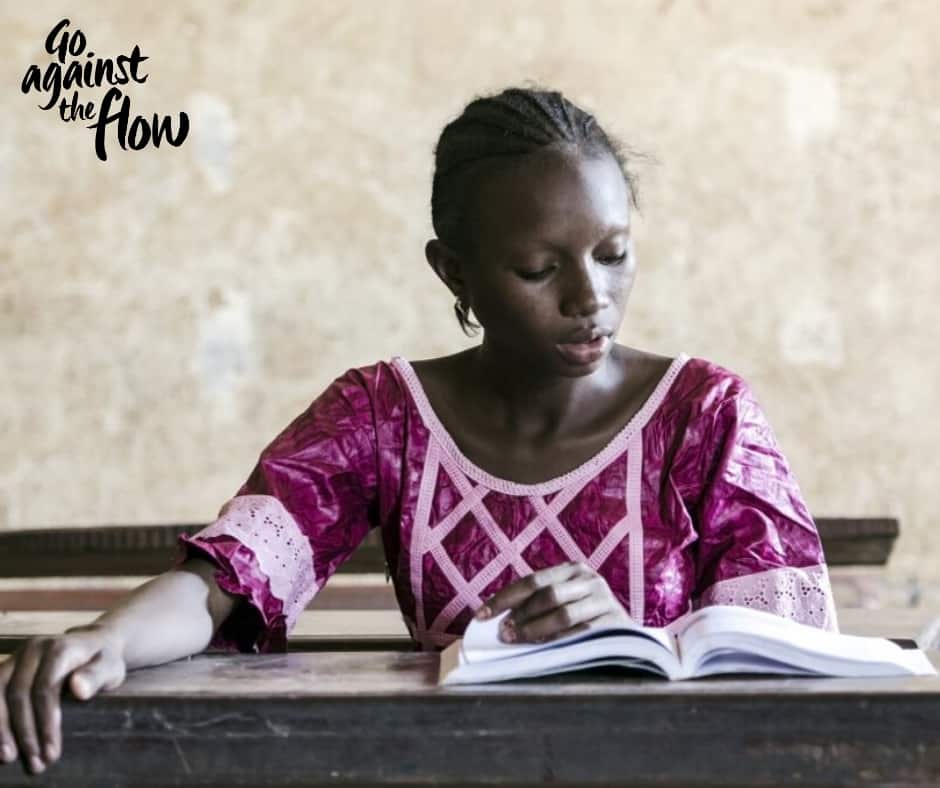 Imagine being a 13 year old girl with dreams of becoming a teacher. Your name is Amal. You love attending school, you’re excited by the opportunity to learn. You get a sense of real fulfillment from what you are doing and you look forward to your future.

You have been raised in a loving but strict home. You have many chores to support the home life your mum and dad give you, as well as helping to look after your five younger brothers and sisters.

Despite the privilege of attending the local government school that covers your education expenses, the family is poor, and there are real struggles for your father to make enough money with farming the small amount of land that belongs to your family.

One of your friends has already been taken out of school in preparation for her marriage to a man she has been pledged to many years ago. He is quite a bit older than her.

It is custom in your remote village to be given in marriage by your family when you are very young. Too young really. As part of this custom, there is often a money exchange to the family of the bride, a major incentive to continue the practice and help ensure the survival of struggling families.

You desperately hope your family won’t go through with the plan they have been encouraged to fulfill by village custom. Your husband-to-be is an older man you only ever met when you were a little girl. But the current drought has made it even harder for your family to grow enough just to survive. They are desperate to get out of this struggle. Your heart wants to hold onto your dream, but you understand even more now that you have to submit to your family’s wishes.

Child marriages are not uncommon in some parts of the world

Whether it be for reasons of survival or just the influence of tradition, the marriage of young girls is still a real story for millions of girls like Amal. In fact, according to UNICEF (United Nations Children’s Fund), there are more than 700 million women worldwide who were married as children.

Along with the ‘roller-coaster’ of emotions: fear, confusion, betrayal; there is also the reality that you have to give up your dreams, or for many, dreams are never an option in the first place. You have so much growing and learning still to do and you will do it as a wife, and possibly, as a mother.

And with marriage, comes sex

But for Amal, and girls like here, it doesn’t end at marriage. In most early marriages, resistance to sexual intercourse isn’t an option. The young bride has little to say against protecting herself from pregnancy or diseases. She is often expected to get pregnant despite her body not being fully mature. This often happens when a girl hasn’t even had her first period – really! The pressure is on for her to prove her worth and status in providing children.

When younger, complications during pregnancy and delivery are unfortunately much more common. When the pelvis and birth canal are not fully- developed, it makes it harder for a baby to be born.

Whether married or unmarried, for girls between the ages of 15-19 years old, pregnancy-related death rates, either for the mother or baby, are a leading cause of mortality worldwide!

Behind child marriages and sex, are harmful and brutal traditions

For Amal, preparation for her marriage started long ago; in fact, it may have started well before her first period with the practice of Female Genital Mutilation (FGM). In 2016, UNICEF estimated there were 200 million women in 30 countries who had been subjected to FGM. Some girls as young as eight have had to go through it!

FGM is a deliberate mutilation and causing of injury that removes part or all of a young girl’s genitalia. This is often the removal of the labia and clitoris, an area that is important to sexual pleasure, stimulation and arousal. It has no health benefits and it is harmful to health in many ways. Essentially its purpose revolves around controlling women’s sexuality.

Other variations of FGM involve cutting and sewing all external sexual organs to narrow the vaginal opening, virtually closing it and the urethra (where your pee comes out). This makes it awkward to go to the toilet and even to menstruate — that doesn’t need any more added difficulty!

As a result of FGM, the vaginal opening can be made so small that it needs to be cut open to have sex and to have a baby. This can be a major contributing factor to childbirth complications. Imagine trying to push a baby out when you’re all sewn up down there with no one around to help you! This contributes to what is called obstructed labour or delivery. Practices of early marriage and FGM for a young girl can be a lethal combination!

After marriage and consummation (that’s having sex) girls like Amal then put their tiny bodies through the trauma of childbirth. In a prolonged and difficult labour or delivery for a young girl, pressure from the baby’s skull can damage their pelvic organs, tearing at the walls that separate the bladder or bowel from the vagina. This tear or hole is medically known as a Fistula. It causes the uncontrollable leakage of your wee and poo and it is something that can only be repaired by a simple but life-changing operation.

Just think, this is something these girls have absolutely no control over but leaves them devastatingly isolated and feeling shame. There is often no one to explain this condition to them, but many who segregate them and force them out of communities due to their hygiene issues.. To constantly leak and smell leads to being ostracised, abandoned and even divorced by their husbands. This situation can go on for many years and even permanently.

Two million women worldwide, mostly in developing countries, suffer from fistula. It has virtually been eradicated from the west where focused improvements have continued to happen in health care for delivering babies.

But Fistula can be cured

There is hope for child brides like Amal, and all women suffering the side-effects of complicated deliveries. In the developing world there are concerted efforts by the United Nations and other humanitarian aid, development, and advocacy organisations to bring change where it is needed. Whether that be in empowering young girls and their communities through health care and general education  or directly to repair a Fistula.

The Addis Ababa Fistula Hospital in Ethiopia is the only one of its kind that exclusively treats girls suffering Fistula injuries. It was set up all the way back in the 1970s by an Australian couple, Reginald and Catherine Hamlin. Good on them! It now sees more than 1,200 girls every year, curing over 90% of them with a life-transforming operation. They do this, solely, on donations! In addition, they have resource centres that support girls so they can attend school and learn about women’s health along with a regular curriculum. They and many others are giving countless women and girls back their lives.

Like an Amal, these girls’ dreams are being restored. There is a movement happening, and powerful people are giving a voice to those who aren’t able to cry out against their own mistreatment! They are part of a #GoAgainstTheFlow movement, taking an active part in helping stop early marriage and FGM. We say – Go Girls!!