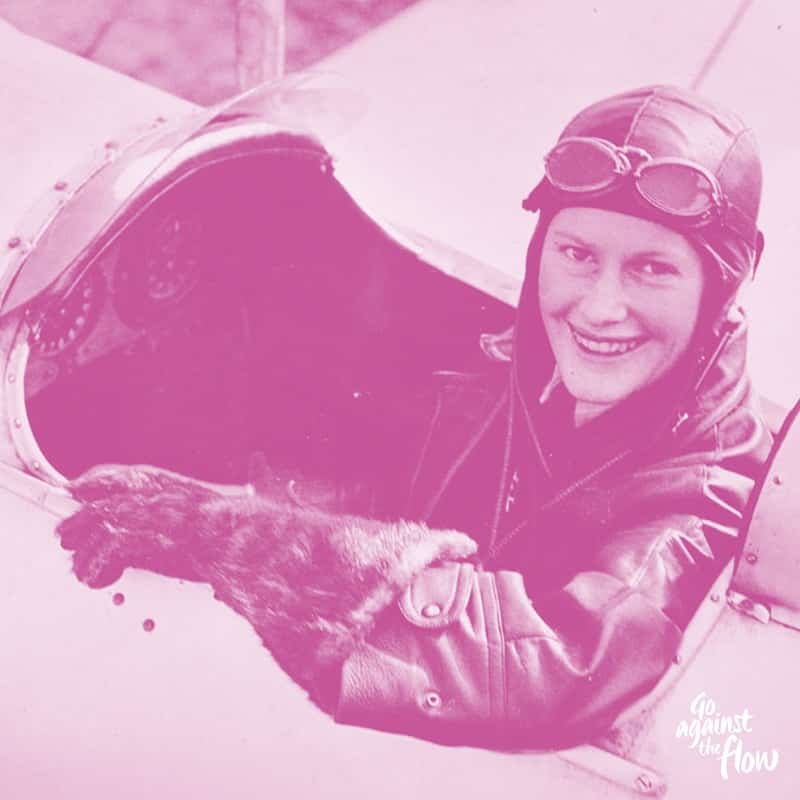 To celebrate women making history this March we take another look at one incredible young woman with a dream …..

Ever had a dream in your heart since you were little? A dream that hasn’t left you, but taps away at your heart strings saying ‘I’m still here!’ Something that has aroused such a passion in you, giving your heart a flutter anytime anything is said or you give a thought to it. Then it’s those thoughts. The ones that have been fuelled by voices that say you ‘can’t do that’. Even from people that are close to you. Little doubts creep in and you almost start to believe that it might be just too hard, almost.

Nancy Bird had a dream just like any young woman. The year was 1919 and it is said that when she was about 4 she jumped of the backyard fence many times exclaiming she wanted to fly. She called it the ‘eppiplane’ game. The whole country was apparently caught up in the excitement of a plane race between England and Australia. Back then flying was a massive achievement, as people only started to fly a few years before. Instead of a 3 month journey on a boat, they were conquering it all in just a few weeks.

Interesting and ironic that you’d have a name like Bird! Her girlfriends at school said that she was always talking about aeroplanes.

When she was thirteen, she experienced a joy flight at a local fair and they say from that point she was hooked. She was drawn like a magnet. She set a goal to become air queen and aviator pioneer!

But …… Nancy’s dream of flying was certainly bigger than any name, even her ‘Bird’ status.

The thing is Nancy was the first woman here in Australia to push the ranks, male ranks that is. This was a time when it was skirts only girls. It was only the men that wore the pants. No woman had or was ever flying for a living at that time in Australia, and even the world for that matter. Although we’re sure that many girls still had dreams that would challenge the status quo back then!

Bird was 17 when she had her first flying lesson in 1933. To even get to this point though would have been so challenging in itself. Her gutsy resolve put her in good stead to tackle the onslaught of opinion, opposition and doubt. The biggest one here would have been her Dad. One account states that he was strongly against her flying. This would have been a heartbreaker for Nancy. She faced a lot and it wouldn’t have been easy.

She stuck at it, never let go, getting her to the beginning point of trajectory that would change her life not just for her but for so many others!

Nancy was small in stature, apparently only 5 feet tall, but definitely not in heart strength and courage. She knew that if she wanted to continue flying she would have to make it her career path, making it a ‘zoom in the sky’ living. This is where she broke the mould. Already Jean Batten from New Zealand, Amy Johnson from the UK and Amelia Earhart from the US were achieving amazing things in the air all around the world, being ‘firsts’ and breaking records. Nancy would have been privy to this for sure, committing to the pioneering path, may be without realising it at first. She just wanted to fly!

The ‘Bird’ gets her wings!

Charles Kingsford Smith was an early Australian aviator who became famous around the world for becoming the first to fly from the US to Australia in 1928.

Maybe this doesn’t sound like much? You might be saying this happens every day now. You’re right – multiple airlines go back and forth from Australia to the US every day. However, back then this was all new and pretty massive! Imagine a similar thing with all the hype around flying into space or even Mars now, not just for astronauts, but for everyday people! It would have been like this, incredible excitement and some awe inspiring stuff.

Nancy latched on and when ‘Smithy’, as he was known, opened up a Flying school she was in for those lessons she’d saved long and hard for. She was his first student! She dedicated herself from then on attending every weekday for 2 years until 1935.

She finally accomplished her queen of the air status getting her commercial pilot’s licence. The ‘first’ ever! Woohoo Nancy! You could never keep this Bird down. She was 19 then!

It was by this stage that her Dad had literally seen before his eyes his little girls dreams turn into reality, a pioneering the way reality! He chipped in with Nancy’s Aunts to help get her that first plane, a 4th hand Gypsy Moth, which had been restored from a crash (see picture).  She finally had her wings!

The Commercial ‘Bird’ with a cause

With her new wings she was off, aiming to find and generate income, going out and getting work. A lot of that initially came from ‘Barnstorming’, which was basically landing on country and outback towns during fairs/country shows offering joy rides and building up a stellar reputation. This generated a lot of excitement and interest, as flying was still so new to everyone, still seen as very risky and even more out of the ordinary when it was a young women doing it!

Go Against The Flow Nancy!

Nancy finally got steady work with the Far West Children’s Health scheme in NSW when she started providing a Flying Ambulance service to Burke, outback sheep and cattle stations.

The focus was to assist young outback mothers with their children ….. but it seemed to become even more than that.  She was in an incredible position assisting nurses to access these remote areas providing often life-saving healthcare to many Australians who would not have otherwise received it.

Her dream had not only changed her life but was changing the lives of other for the better!

Flying in those days was much more risky. There were no runways, paddocks were dotted with rabbit holes, and there were no radio or air traffic control towers and no navigation equipment. She made many trips by just using a watch, map, compass and flying down low to look for landmarks often given by the locals. They could be quite unusual sometimes – like a dead horse or the fresh trail of sheep droppings!  Despite the risk of dealing with quite wild weather many times and the high probability of crashing in those early days, she never once crashed or caused any harm to her passengers in the history of her behind flight controls.

That’s a pretty impeccable record. Even when she flew in races for fun, she stayed safe. She was spreading her wings, embracing every opportunity and taking others along for the ride. Nothing was going to stop this Air Queen.

It was interesting to note that Nancy always found it a difficult challenge when Toilets were scarce in the outback. Long flights plus lack of loos and really hot days weren’t always a good combination when she took to not drinking enough water. She said she was often dehydrated, which would have been tough to deal with. Maintaining strict bladder control was definitely questionable back then and definitely not recommended by our Go Against The Flow team. Take a look at some important information about why here OR even call the National Continence Helpline if you’re wanting to take the plunge and speak to a Health Professional! Check out this link for more information about the Helpline.

Toilet breaks, even bush toilet style should have been taken! Thank God that pioneers like Nancy did the hard yards back then so that no pilot has to go through anything like that again. It makes us think too that we’re pretty happy for important stuff now like the National Public Toilet Map! When you’re needing to find a local loo and you’re just not having much luck it gives you access to information on the location of almost every public Toilet in the country. Even in remote parts of the country now where we know Nancy would have flown and been called the ‘Angel of the Outback’! Take a look at the Map here

Pioneers like Nancy go before us, paving the way to make it better for others, going against the flow, and changing history forever!

Nancy still encountered those opposing voices. She vividly recalls many times that the people she served, worked for and gave joy rides too were always a little shocked to see her flying – ‘My God – it’s a woman’! She was rousing a few feathers while she was continuing to spread hers. We think opinions were put aside when they experienced first-hand that they were in very skilled and safe hands!

However, not everyone however. Word spread about Nancy and one State defence leader apparently squawked that women were not “biologically suited” to flying. What the?

Pressure from male colleagues and politicians unfortunately built significant momentum, enough over several years to finally push Bird out and stop her Flying for some years in Australia. It was at the same time in history when the World was on the brink of World War 2, sensitivities and alert mindsets were high.

Everyone was just a bit more on edge. Her beloved Gypsy Moth was sold and apparently used for target practice by training fighter jet pilots.

Her passion for flying never changed and she finally flew again, after the war in the 1950s, rousing feathers and helping to spread the wings of many women by founding the Australian Women’s Pilots Association. Then it was helping establish The Women’s Air training Corps.

Nancy eventually helped lead the way for the Royal Australian Air Force to set up the Women’s division. She became a sought after speaker, supported many charities and was finally ordered an OBE in 1966, a pretty high honour given by the Queen of England herself. Now no opinion could question the respect that Nancy was due for her achievements in paving the way for other young women who dreamt of spreading their wings too!

So it’s a massive shout out to Nancy Bird-Walton, an aviator pioneer, someone you now know of as a Go Against The Flow girl.

Like any of us, she had a dream, pursued it, despite the challenges, difficulties and opposition and paved the way for so many others to see their passions fulfilled.

She helped change the course of history. Thanks Air Queen!