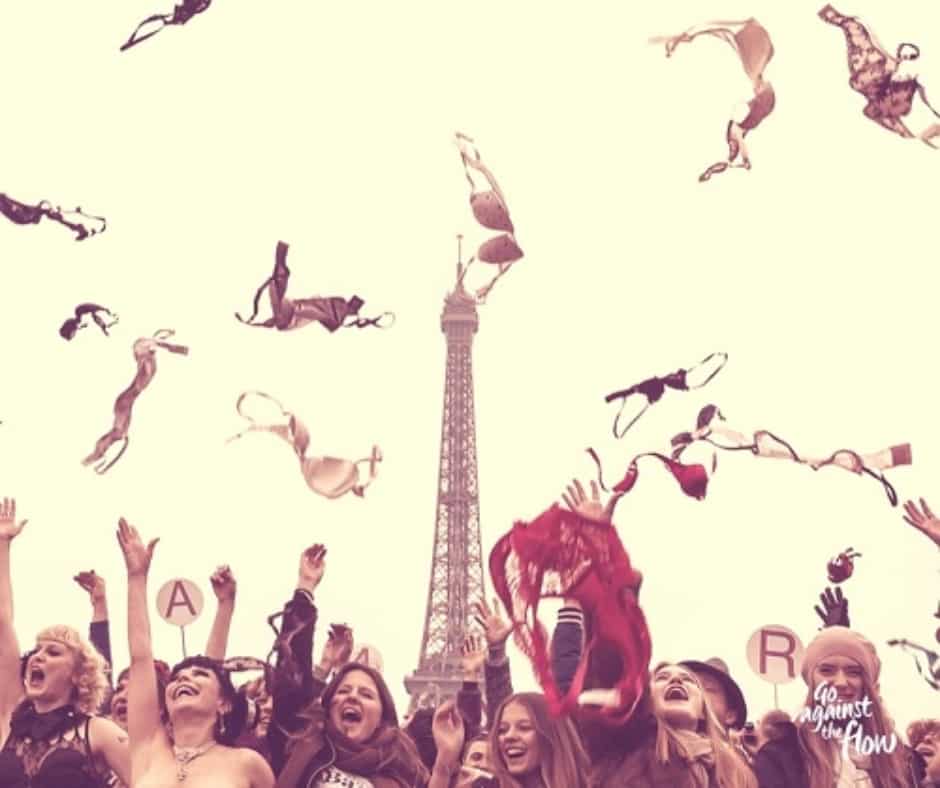 We can all agree that after a day of hustling, the light at the end of the tunnel is getting home to wind down. And that much desired wind down starts the second we unhook the bra from our chest and toss it as far away from ourselves as possible. It has become such a habit, a daily ritual of restricting our tatas until we are safe within our own home, that the slight discomfort goes pretty much unnoticed until we start craving plopping down on our own familiar couch. From the moment that craving crosses our minds, each slight squeeze from the band, all the little shifts in the cup, and every awkward underwire encounter becomes a nails-on-the-chalkboard-like annoyance. Because let’s be honest, there’s no bra that fits anyone perfectly.

Have you ever wondered when this whole bra-business started? What is the thought process that encouraged us women to trap our chest inside these cups? Was it another idea created for women by men? Whether you love ‘em or you hate ‘em, we invite you to test your knowledge about our dear ol’ boobie traps.

Who were the first women to sport a bra?

What led to the decline of corsets in America?

When was ‘brassiere’ added to the dictionary?

Was it a man or a woman accredited with the invention of the bra?

According the the Guiness Book of World Records, how much is the most expensive bra in the world valued at?

Are you feeling confident about your results, or is bra trivia a bit more tricky than imagined? Let’s start at the beginning to see how your knowledge racks up.

For most of ancient history, women naturally chose to be bare-breasted. That means no bras, no interference, and not much support in the boob region. It wasn’t until the Roman Empire that girls began wearing bra bands to avoid saggy boobs later in life. As time continued, variations of these bands were introduced to minimise, accentuate, or support women’s breasts. During the Middle Ages, things became more, um, heavily supported. The use of corsets became common amongst women everywhere.

Contrary to what many believe, corsets were not first designed to shape women into an hourglass figure. Corsets were first worn to minimize and support the breasts and torsos of women, and in the Victorian era the goal was to give women a cylindrical shape, meaning that a flat torso shape was preferred over an hourglass figure at this time. Corsets remained quite common well into the 1900s. In fact, the United States didn’t see a decline in the use of corsets until World War I.

In the first World War, men were deployed and women were left to take care of the home land. This meant that women had to replace men in most jobs and doing so in a corset would have been plain ridiculous and far too restrictive. The modern bra became widely used across the US resulting in 28,000 tons of metal had been saved from bringing the production of the corsets to a halt!

Invention of the Modern Bra

Although Vogue Magazine used the word ‘brassiere’ in 1907, and the Oxford English Dictionary accepted it in 1911, the modern bra wasn’t patented until 1914 by a well-esteemed New Yorker. Ms. Mary Phelps Jacob put together the first prototype of a modern bra at the bright age of 19! She designed the brassiere after disliking how chunky her corset looked under her evening gowns. Using her clever mind and familiar resources, she strung together two handkerchiefs with delicate ribbons, changing the lives of women everywhere.  By 1918, women across Europe and the US adopted Jacob’s brassiere as their preference of undergarments.

Within the next few years, the purpose of the brassiere changed rapidly. By 1920, flappers had chased the trend of using bras to flatten their chests. Only a couple of years later, women were seeking brassieres to enhance, rather than flatten, their chests. And by the start of the next decade, brassieres were such a key part of women’s wardrobe that we ditched the extra syllable and began simply calling this item of clothing a bra.

The bra as we know and love accept it was far easier to produce than corsets. It was quicker to create and it required less material. But while bras didn’t need sizing as specific as a corset required, it was easy to see that not one size could fit all. By the end of 1932, bra sizes were introduced ranging from A cups to D cups.

As with any rise in popularity, the bra underwent some adjustments to keep up with fashion trends. Up into the 1960s, more styles were being introduced such as the bullet bra to portray a larger chest, lace bras, front clasping bras, push up bras, monokinis, training bras for young girls, and even maternity bras. Everyone seemed to love bras! Until suddenly, they didn’t…

On 7 September 1968, a group of activists in the United States recognising beauty standards as ‘ludicrous’ protested the Miss America pageant. The 400 women involved in this protest planned on burning items that contributed to the ludicrous beauty standards such as high heels, makeup, and bras, or mechanisms of female torture, if you will. Because these women activists were sensible and wanted to be taken seriously, it was important that they get their point across in a legal and appropriate way. Since actually burning items in public would have been frowned upon by the police, they instead threw these beauty-standard-enforcing items into a trash can in a public display. Despite not actually burning any bras, their protest was seen as iconic and the term ‘bra burners’ stuck.

For those who choose to wear bras today, the options are essentially endless. Bras have continued to adjust to the trends of today (hello, bralette) and adjust to the needs of every individual. Are you a nursing mother? There’s a bra for you. Star Wars fan? Try this golden bikini-inspired bra. Yogi? Lululemon Sports Bra. Disposable income? Why not chase after Victoria’s Secret’s 2001 Heavenly Star bra? It’s made from diamonds and sapphires and is valued at 12.5M USD, currently the most expensive bra in the world according to the Guiness Book of World Records.

How did you do on the quiz? Was your brain already chalked full of random boob knowledge or was it just the ridic cost of the Victoria’s Secret bra that got you? Test your friends and let us know how much you knew!